Avalon Tent was chosen to develop a temporary workspace for a major government agency, complete with long-term infrastructure. 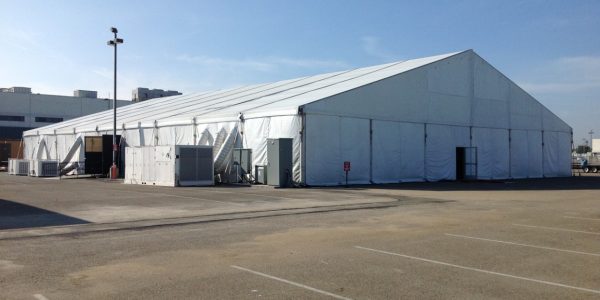 The government agency needed a large space of over 14,000 square feet for mail sorting purposes. In addition to the structure, this temporary warehouse needed ramps to support carts, as well as ADA compliant entryways. They also needed an infrastructure that was appropriate for a long-term work space, even though the warehouse was temporary.

The result for this project was a clearspan structure, which was 30m x 45m x 4m. Avalon Tent also designed rampways with railings, as well as large double doors to accommodate mail sorting carts and bins. The structure also had a fire alarm system, HVAC unit, temporary restrooms and temporary power distribution. Although it was originally planned for just a six month rental, the project lasted for over a year.