Avalon Tent developed an open outdoor structure for guest entertainment that was used during a prominent event for monster truck enthusiasts. 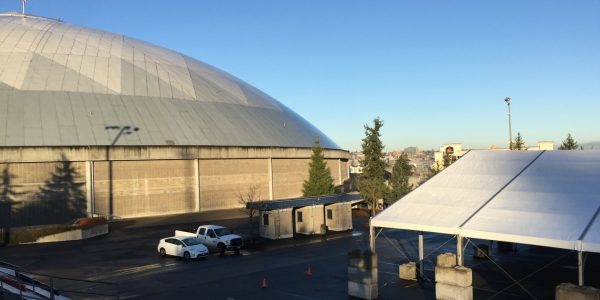 For a major monster truck event, Avalon Tent collaborated with a live entertainment and marketing company to create an open-air tenting structure for guests. This live racing event has been a touring attraction throughout the US and abroad for over ten years and has a following of thousands of people. Their parent entertainment company manages live and touring shows in a variety of genres.

At this event, the company needed a large tent that would allow guests to mingle throughout the event. The tent was placed next to the arena where the main event took place and visitors would pass by it to get to their seats. Since there was a high density of people attending the event, the structure needed to be secure.

The result was a huge structure, sizing 25m x 30m x 4m. The summit frame tent had high ceilings and no walls to fit as many people as possible. To ensure that the structure would stay in place throughout the event, it was secured with concrete blocks.